Vidiemme at the Artificial Intelligence Observatory

Yesterday, Monday 12 February, the final conference of the Artificial Intelligence Observatory was held, in which Vidiemme participated both as a partner and as a speaker.

The Observatory, now at the end of its first edition, was born as an answer to growing interest in the corporate arena and public opinion in general, towards Artificial Intelligence. Although it is a subject that has already been discussed for many decades, only now is it emerging from the research phase to find application in various areas, becoming part of people’s everyday lives without them noticing.

As Giulio Caperdoni, Vidiemme’s Head of Innovation, pointed out during his speech, it can be said that a technology is successful when it enters daily use without people realizing it, without noticing its presence. And that’s exactly what is happening with Artificial Intelligence, which is now taken for granted in some applications, for example in email Anti-Spam filters or in Spotify’s track display.

All this is possible thanks to the algorithms that support Machine Learning, making AI ever more pervasive in our everyday lives.

The Observatory research started by defining AI ​​on the basis of four parameters, from which the following statement derives: “AI is the branch of computer science that studies the development of hardware and software systems with abilities that are typical of the human being (interaction with the environment, learning and adaptation, reasoning and planning), able to autonomously pursue a defined purpose by taking decisions that, up to that moment, were only entrusted to human beings“. 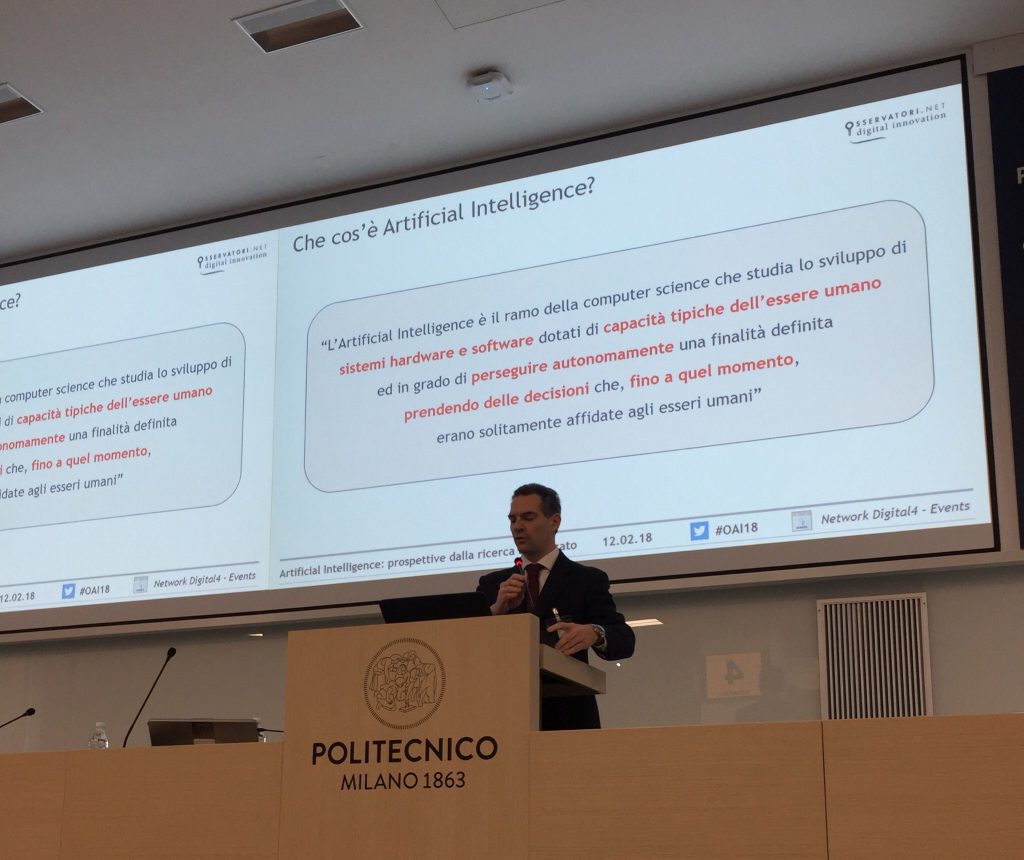 The Observatory’s definition of Artificial Intelligence

This statement is at the base of the research that studied more than 700 large Italian and international companies, to analyze the areas in which Artificial Intelligence is used, and which of its solutions are the most widespread.

The spread of the Virtual Assistant

The picture that emerged represents a situation aligned with Vidiemme’s direction: the AI ​​solution most adopted by the companies analyzed is that of Virtual Assistant, both text and vocal.

Exactly as Giulio Caperdoni pointed out, thanks to Virtual Assistants a new relationship between man and machine is being created in which, in the near future, conversations will be the new interface and the use of voice commands will make the interaction even more natural than the text version.

The areas of application and solutions of the Virtual Assistant

Virtual Assistants were one of the most important points of the Observatory, due to companies’ growing interest in this technology. Indeed, the Observatory research sought to understand the areas of application in which they are most widespread.

The analysis considered 118 Chatbots from Italian and international companies. The data that emerged, once again, supports the path taken by Vidiemme: there are four major areas of application, and in fact the company operates in three of them, proposing and developing solutions for its customers:

The research finally led to the definition of the AI Journey, a model developed to guide companies in implementing Artificial Intelligence solutions. In fact, it emerged that the different entrepreneurial realities are aware of how delicate it is to introduce AI to support or replace one of their processes, and the integration of this technology is to create an external rather than internal competitive lever.

As also pointed out by Giulio Caperdoni, quoting John Wooden’s phrase “Never mistake activity for achievement“, we are experiencing a phase of Artificial Intelligence in which enthusiasm (activity) is the engine to reach concrete objectives (achievement). It is therefore necessary that behind this enthusiasm there is a guide for companies to follow.

Looking to the future

During the Conference there were numerous presentations and discussion panels all focused on Artificial Intelligence, and it emerged how companies and even start-ups can no longer ignore its presence: we are in the middle of what is defined as the fourth industrial revolution, and for this reason our way of doing business is changing profoundly.

Vidiemme’s participation in the Artificial Intelligence Observatory and the closing Conference confirmed the convictions that led the company to create getAI! the new Business Unit created this year, dedicated to Artificial Intelligence and Conversational Interfaces, with the conviction – which is also the basis of the company vision – that in five years any technology which is non-conversational will become useless.